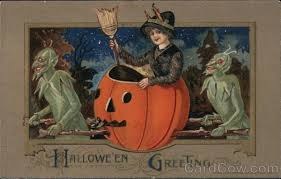 Recently, August 2017, I visited Salem, Massachusetts. Although Salem is a beautiful port city, most of its cultural identity centers on the infamous Salem witch trials of 1692. The witch trials were a series of prosecutions of people accused of witchcraft. Held between February 1692 and May 1693, the trials resulted in the executions, for witchcraft, of 20 people, 14 were women.

Rare, sexy Samuel Schumucker witch riding a jack-o-lantern, possibly drawn by E. Nash. This 1909 postcard illustrates how to fill every inch of the message section and is valued at $285.

In 2011, Salem changed its city logo to reflect a witch’s hat that also resembles a sailboat. And the most visited building in the town is appropriately called Salem Witch Museum. All in all, Salem is a charming city.

A Salem witch souvenir spoon, created by Daniel Low in 1891, is credited with starting the souvenir spoon hobby that swept America in the early 1900s. But, year in and year out, witch postcards are the most popular tourist souvenirs in Salem. Nearly every store and restaurant in town sells witch postcards. I bought one in August at a diner appropriately called Witch’s Brew Cafe.

Postcards, in general, have evolved over time. Originally federal law restricted postcard sizes and colors, especially after February 1861 when Congress authorized the private printing of postcards to be sent in the mail. John P. Charlton immediately copyrighted the first postcard in America.

However, until the US government began making legislated postcards in 1872, all postcards were privately created, such as Lipman’s Postal Cards that were sold in the early 1870s. After the government became involved in postcard production, postcards took on a somewhat regulated size and design with one side of the card for a message and the other for a recipient’s address. The message side later morphed into printed cartoons, messages, and photos while the address side divided to include a short written message to the recipient.

The Golden Age of Postcards and deltiology (the collection of postcards) both began in 1907 when Congress passed an act allowing privately produced postcards to bear messages on the left half of the card’s back, totally leaving the front side for art work and clever sayings.

No one knows when witch images began to grace the front of postcards, but as both souvenir and Halloween cards, witch postcards have been around since the early 1900s. And there is one thing most witch postcards have in common—a wonderfully, wicked stereotyped image of a witch. The postcard I purchased in Salem is a good example of a stereotyped witch, showing an old hag, with gray hair and long drooping nose, in a black witch’s hat, cape and robe, riding a broom across a full moon. It you strain your eyesight a little, there appears to be a wart on her nose. The card is the start of a fun collection and only cost 50¢.

Today, some Halloween postcard collectors only collect witch postcards, paying 50¢ to $400 or more for a single card. One witch artist that collectors look for is Samuel Schumucker, who painted postcard images produced by Detroit Publishing. Another popular artist was John O. Winsch, who was a publisher of postcards from Stapleton, New York, between 1907 and 1915.

It is interesting to note that wicked witches are accused of living lives that any elderly woman might live—wearing black mourning clothes for their dead husbands, living alone, loving the attention of children, having a cat as a companion, and sweeping their front porch by moonlight with a broom of ash bristling with birch twigs.

It is easy to see how spinster women in Salem, circa 1690, were accused of witchcraft since older women and witches share so many common traits