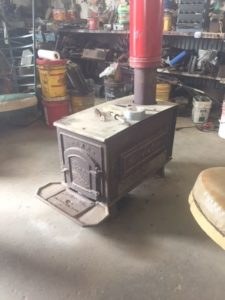 It is a beautiful spring morning in Louise, Texas where an occasional train whistle, and a rooster crowing can be heard in the background. Charlie and Margie Stehno are both dressed in matching khaki coveralls and wearing white straw hats. Charlie smiles and points toward Margie “She makes doing all of this worth it.”

“All of this” meaning the many different vintage machines the two of them restore together using various engines, with a 1930’s Maytag one-and two-cylinder engine being a favorite. 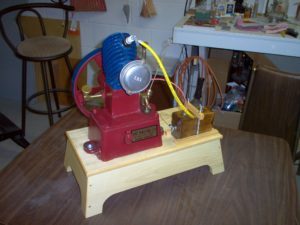 The pair have been married for 13 years, but were friends before that. Charlie was the best man at Margie’s first marriage ceremony to his cousin 47 years prior. After Margie’s husband passed, they married and began to build a life together restoring machines from vintage engines. They sell these machines at various swap meets around Texas.

“If it weren’t for swap meets, I wouldn’t be into this business,” Charlie said. “That’s what started everything.” Swap meets are the place where people with similar interests can buy, sell and trade parts that are no longer available for purchasing in a store.

Charlie was 28-30 years old when his uncle gave him his first engine – it had been used to pump a water well. Chickens meander around the yard and throughout the many barns. Each barn is filled with parts from “Model A” and “Model T” rear ends, heads and blocks – to vintage Maytag motor parts. “Any kind of parts a person could want,” Charlie said. A pale green, pristine, 1926 Maytag washer is powered by one of their engines and was only used once by its original owner.

One of their most prized machines is a 1909 Majestic 7-horse power one-cylinder that ran the cotton seed cleaning and processing operation . Affectionately called “Big Mo”, it came out of El Campo, Texas and was given to Charlie 30 years ago. He painted and restored it to working condition.

Other machines include a woods buggy that they drive at Christmas. They hook a trailer behind it and take their 10 grand kids for hayrides. A Gibson garden tractor with a blade on the front and a plow on the back with no sheet metal, and nothing but a tractor seat and one steering handle is still being used.  A rare Fairmont engine that used a conveyor belt that ran both ways to power a square railroad car back and forth on the track carrying supplies is also among their collection.