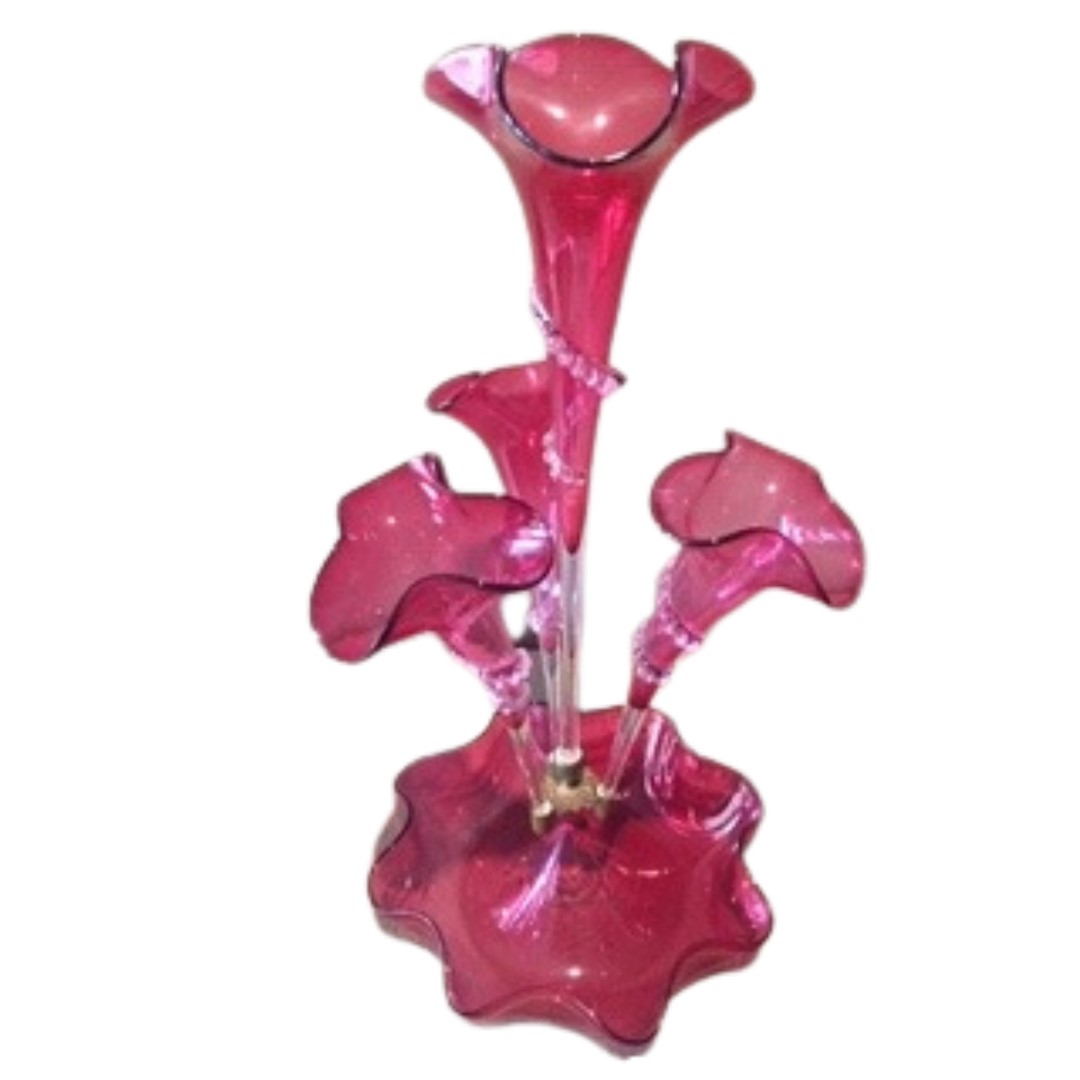 Max Miller sells hundreds of rare glassware pieces and various Epergne table centerpieces are among these pieces. Max is known by collectors around the country as a source for the best selection of rare glassware.

I am frequently asked how do you pronounce  ”Epergne”?  it is derived from old French and the “g” is silent. Images of Epergnes

Whenever I have an Epergne for sale it gets lots of scrutiny from the public. What is this piece used for? My answer is usually that it is a decorative piece from the Victorian era as most of the examples I’ve had are from that time.

The epergne is a table centerpiece for flowers and food. The origin of the idea is attributed to the courts of Louis XIV in France and George I in England around 1710. Imagine a lavish banquet table at Versailles with all its embellishments. The original epergnes were made mostly of silver and were for serving food.  A fabulous large cut glass epergne was made in Edinburgh, Scotland for Queen Victoria’s ascension to the throne and was completed in 1840.

As time went by the epergne became more accessible to the middle classes and were made of a combination of metal and glass. At the bottom of the epergne is a large bowl for fruit and sweets and an upper part is a group of large blown trumpet-shaped lilies for elaborate floral arrangements. The English glassmakers came up with combinations of three, four, or five lilies sometimes with fragile canes supporting baskets. These examples are highly prized by collectors. The canes are clear twisted glass and curled on the end.

Stevens and Williams, Davidson, and Stourbridge produced many glass epergnes for the English market at the end of the nineteenth century and the beginning of the twentieth century.

The favored glass colors were Cranberry and Green and Blue with Vaseline and opalescent accents and could be embellished with clear glass trim called Rigaree.  The most often found examples have a fluted glass base with a small metal fitting that holds the upper flutes The fitting is usually held in place by plaster of Paris and has a notch in the round holders to position the trumpet properly. The center lily is threaded and screws on but the satellites just slip in place. Some of the metal frames could be highly stylized and a significant part of the overall design.

The design of this rare antique glassware, the Epergne was largely influenced by Italian glassmakers. They had perfected decorating techniques on the island of Murano. It is one of the rare antique glass designs.

American companies like Cambridge, Fenton, Westmoreland, and Fostoria developed all-glass versions of the Epergne in the twentieth century. These are the examples you will find most often on the market today.

According to an article written by The Outer Banks Candle Company, when looking to date your antique glassware it’s important to consider a few key factors.