Determining the Age of Quilts 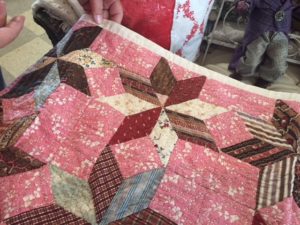 For Sarah Sang, who previously owned the antique shop, Carmine Serendipity,  in Carmine, Texas (and who also fosters hunting dogs for three different rescue organizations), combining her undergraduate degrees in anthropology, history, and chemical engineering has led her to fascination and love for the history of fabric and quilting. She said the age of fabric can be determined by dye lots, and dye colors were determined by world events such as major wars.

England and Africa had more of an impact on fabrics, quilting, and clothing because of the fabric mills.

Indigo fabrics are known for originally coming from South Africa, and the” blue-black” terminology refers to the black workers who dyed the fabric that came from South Africa and then shipped to New England. Histories of Indigo 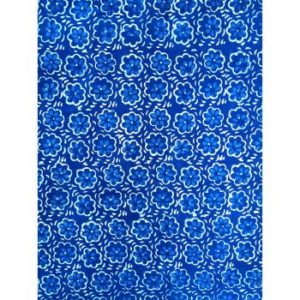 Blue and Brown Indigo Fabrics Sought After by Quilters

Original 1860s fabric was created and woven in Manchester, England, and then it was sent to South Africa to be dyed by the black workers who worked in the mills. These workers worked with the blue indigo dye so much that they developed a blue tint to their skin. Thus the term “blue blacks” was created. Blue indigos were dyed by the blue blacks.

Sarah said the blue indigo fabric is very popular for quilting material. “It is worth its weight in gold and it is not easy to find. People who quilt only want to quilt with the best fabrics.”

The beautiful brown indigos were only developed during the late 1800s but the blue-black indigos, meaning the dark blue that looks almost black were only produced up to 1930. These real brown indigos were also produced in South Africa and are rarely made today, and not easy to find. Indigo Fabric: Last Product of English Textile History

The logo on the back of the fabric denotes the mill where it was made in Manchester, England.

All fabric produced in the  Manchester Mills had an “M” logo, but when the fabric was washed or had backing added for quilting, the logo would disappear. The English mill owners felt it necessary to starch the fabric so it all felt the same.  The 100% cotton fabric in stores today gets softer with every washing. 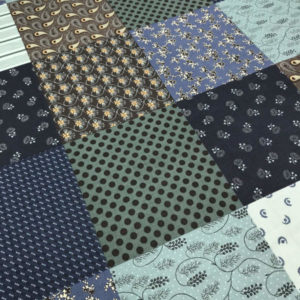 Women who quilted during the late 1800s and early 1900s had servants who did the domestic chores for them and this gave them time to sew and quilt.

The bubble gum pink color used in fabric was not developed until 1930.

“The woman who made the quilt shown in the photo below had stockpiled the brown indigos and then used bubble gum pink to make it.” Today, you can tell if a fabric has been made in China because of the colors and the feel of the fabric.  For example,  Cranston Print and Cranston Villages 2009 fabric wasn’t starched and it was made in the orient.  Most of the earlier fabrics originated in New England and up through New York where they had fabric mills, but all of those mills closed down and fabric began being mass-produced with automated machines.

A good cotton fabric runs from $15 to $30 a yard today if it is made by a reputable company.

Fabric dye lots created after 1955 to 1960 had the colors orange, magenta, browns, greens, and blues,and were considered “day glow” colors. These fabrics came out after the Vietnam war.  A Harley Davidson cheddar orange quilt with some of the blue-black indigo colors from the 1930s is pictured below.

The Mary Engelbreit fabric featuring cupcakes was made in the states in the 1980s and contains the colors red, yellow, black, and white.

Sarah said countries would have certain colors and fabrics, and colors can be culturally oriented.  For example, colors in New Orleans have more feeling than colors in New York where you think of stainless steel and gray. Some French fabric was manufactured with the screen printing method and had gold, orange, and pinkish colors.

One hundred percent linen hemp fabric was made in either France or Germany in the 1930s and 1940s. It was used as feed sack fabric. The farmers filled the sacks full of seeds to sow the fields.

“The linen hemp fabric contained organic colors and began in the 1930s and 40s just before the second world war.  The colors were red & beige, red & white and blue & white. Purple linen hemp came much later and was manufactured on short, narrow looms, not more than 24 inches wide. 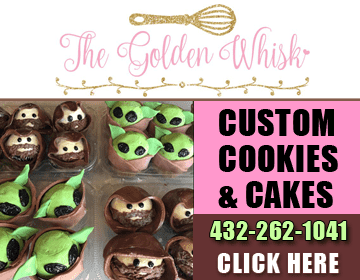