So I went to some local antiques shops and yard sales and found some of these lease signs. When I called him and told him that I had them, he never showed up to buy them, so I thought to myself, “If he can sell them, I can sell them.”


How I got started

(Continued from above)….I started going around to antiques stores trying to sell them. My daughter was in high school and was on a traveling basketball team, and the extra money to pay for travel expenses would come in handy.

I stopped at Goldie’s Antiques in Seminole, Texas one day, which was owned by the late Ernie Singleton. When I walked into his store, I was amazed at all of the butter churns Ernie had displayed up high on shelves on every wall in his store. There were rows and rows of Dazey butter churns – 200 to be exact.

I got to know Ernie after visiting with him for 2 to 3 hours that day and he bought all 5 of my lease signs. Ernie told me, “If you find anymore, give me a call.” I started looking for signs with advertising on them to sell Ernie.

Ernie passed away a few years later when a fire engulfed his store. Ernie had been disabled in a car accident and had lost the use of his legs. He used a wheelchair and lived in a bedroom in the back of his store, which was located on Main Street in downtown Seminole, Texas. Late one night, the store caught fire, and Ernie was unable to make it out.

After Ernie passed, I progressed from buying small, cheap signs to buying better quality and more expensive signs. Back then, I was happy to find a sign for $5 and sell it for $10.

The first good deal that I made selling signs was when I was in Jayton, Texas and I stopped at an old closed-down station. The station was filled with lots of old cars and junk. I noticed a sign inside the fenced in area in the back. I saw one six foot round Texaco sign, one six-foot Shamrock sign and a Gulf sign. I knocked on the door of a house located beside this old station and asked the man who answered the door if he owned the station. He said he did and I asked if the signs were for sale. He said he would sell them and I paid him $300 for them. My wife was upset that I had written a check for $300. The next weekend, I sold the signs for $500 each, for a total of $1500. Needless to say, my wife became a believer and that was the easiest $1200 I had ever made in my life. I was hooked!

For the next few years, I would buy and sell signs. I tried to double my money and was happy with it. What made me start researching the value of signs was the day I bought a power lube sign that had a white tiger on it and the graphics were killer. I gave $350 for it. I had spotted it on my way to Abilene when I was working. I called a friend in Lamesa, Texas. His name was Howard Stout and he was one of the top sign guys in the area. I told him I bought the power lube sign, and would be home the next day. When I arrived home, a buyer named Kathy Swinney was parked in my driveway. Kathy was friends with Howard. She offered me $700 and I took it. I found out later that the sign was valued at $2200 to $2500. From then on, I decided that before I sold a sign, I would find out everything I could about the value of the sign by researching it.

I began to go on Ebay and research signs. I would click on “highest prices” because I wanted to know which signs had the most value so I would remember them when I came across them in my travels.

The best deal I have ever made on a sign was on an OK Used Car porcelain, neon dealership sign. I found it in Monahans, Texas. I was driving around the loop and passed a body shop on the right side of the road. I saw a big sign on a pole about 20 feet in the air. It read: Used Cars and I thought to myself, I have seen that sign before. I turned around, parked and walked into the shop. I asked the guy if he would sell the sign. He said he would and asked what I would give for it. I told him “I don’t make offers, I would rather you tell me what you would take for it.” He said, “Give me $300” I said, “I will give half that if you can help me take it down.” He agreed. I walked out and looked up at the sign. I could see some yellow paint around the edge of a piece of round metal at the top of the sign. I realized they had screwed this round piece of metal onto the sign to cover up the yellow OK part of the original sign.

I told him I had to go to Ft. Stockton, but I would be back. The shop owner called a lady who drove an 18 wheeler that had a huge forklift on the flatbed. She unloaded the forklift off of the trailer. She wrapped a chain around the pole, lifted the pole and sign out of the ground and laid it down. It had four bolts that mounted the sign to the pole. The shop owner called a friend, who was a welder, to cut these four nuts so we could take the sign off of the pole. I called my wife to let her know that I had bought a sign and I might not make it home until midnight because I was not coming home without that sign. I borrowed my brother’s trailer and loaded the sign on it to take it home.

I took the sign to the Texas Antiques Week Fair twice and ended up selling it at the Pate Swap Meet in Ft. Worth, Texas. A year and a half later, I sold the sign for $7500.

I have made a lot of good deals on signs, but none have topped the OK Used Car sign deal. I am still looking for that “next good deal.” I will always have a passion for “the hunt” of finding that next good sign deal. 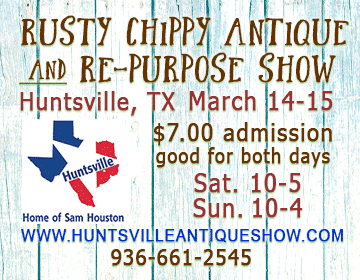